An image gallery for this work can be seen here.

“…there’s one issue that will define the contours of this century more dramatically than any other, and that is the urgent and growing threat of a changing climate.”   Barack Obama 2014 This has been a odd one, a MASSIVE subject, a HUGE collection of source material (See my last blog post for credits) a HUMUNGOUS amount of stitching, all in 30x30cms.  "Contours of the Century" is my entry for the 2018/19 Embroiderers' Guild Members Challenge competition "Life's Rich Pattern"

I’m not sure why I’ve been left with such an uneasy feeling after this piece left my hands on Tuesday.  It could be the fact that it’s my first entry into an Embroiderers’ Guild competition at National level, it could be the rush to meet the deadline without doing nearly as much sampling and research as I would have liked or it could simply be the effect the subject matter is inevitably having on me.  What I do know is that my investigations into the subject of the destruction and potential repair of the planet are going to go a lot further than the 12 months I’d imagined. my teenage kids.  It’s not like I am not aware of the threat to our planet and the urgency of the situation but somehow seeing through the eyes of people 30 plus years younger than me made it all the more terrifying.  The young people I met that day are facing the impeding catastrophe with the tenacity of youth, with colourful posters and rhyming chants and with the impassioned determination to make change, a feeling I remember only too well from my own adolescence. But then I saw this from U.S. Representative Alexandria Ocasio-Cortez and my blood ran cold

“Our planet is going to hit disaster if we don’t turn this ship around, and so it’s basically like, there’s a scientific consensus that the lives of children are going to be very difficult and it does lead, I think, young people to have a legitimate question, you know, ‘Is it okay to still have children?”

AOC is 29 years old and bluntly raises the suggestion that there literally may not be a future for another generation so it might be best to not risk having one.

Activist Greta Thunberg who walked out of school to sit outside the Swedish Parliament, sparking the youth strike movement at the age of 15 asks 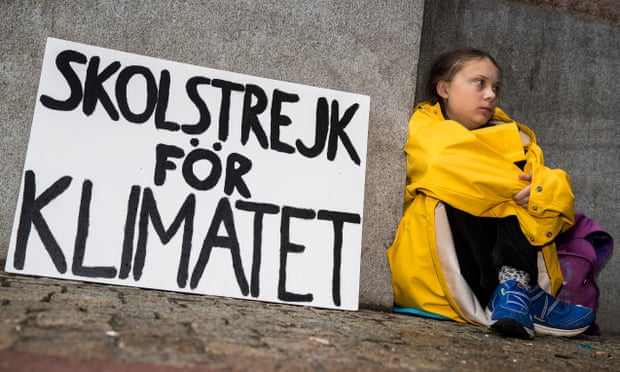 “Why should any young person be made to study for a future when no one is doing enough to save that future?” Studying Google Maps’ satellite layer in detail for my work makes the situation real and tangible. The endless oil fields of Texas and deforestation in Bolivia can be viewed easily with very few clicks of the zoom button.  There are photographs online of a plastic garbage island in the Pacific Ocean that could swallow Texas twice over.

The UN warns that we are less than 12 years away from global disaster if we do not act now to limit temperature increase to 1.5 degrees.  This is real, this is now. The difficulty I found in completing this piece and the unease I feel about it seems entirely appropriate somehow.

The next piece in this series will have the prompt of "Home" and will be a part of the Embroiderers' Guild's 2019 Members' Project exhibitions.